Some tips from Vandoren :

• It is important not to consistently play on a reed which is too hard or too soft. This will limit the capabilities of the mouthpiece you have chosen.
• Play-in new reeds: play them for a few minutes each day before normal use to break them in.
• Reed Rotation: Do not get used to one “good reed.” It will become progressively weaker and so will your lip muscles! All subsequently used reeds of the same strength will seem too hard.
• Choose your reed to suit the place where you’re playing: a softer reed in a resonant, dry, air-conditioned venue, a harder reed in an acoustically “dull” room, out of doors, or in a damp place.

Traditionals feature the thinnest tip with the thickest heart, resulting in crisp articulation with a full, dark sound.

This reed is designed to produce a quality of extremely pure sound due to a very thin reed tip (the area of reed with maximum vibration), balanced by a solid vertebral column (more cane in the area which climbs gradually to the heel).

Produced from cane selected for its specific proportions, the V12 reeds have a thicker heel and are cut on a longer palette with a slightly thicker tip than the Traditional.

The longer palette means that more of the reed is vibrating, resulting in a deeper, richer sound. The thicker tip gives body to the attack and also increases the longevity of the reed.

The success of V12 reeds in the clarinet world for 25 years has led us to transpose their characteristics and advantages into the saxophone world. With its very precise attack, homogeneous timbre in every register, controlled high notes, warm and velvety sound, this new reed offers exceptional possibilities.

JAVA reeds are more flexible than Traditionals and V16s and vibrate on a long palette, creating a bright sound with immediate response.

Developed in 1983 for jazz and popular music. A thicker tip and a more flexible palette* than the Traditional reed allow vibration over a larger surface area with maximum elasticity.

This type of vertebral column gives the musician much greater playing flexibility, as the resultant elasticity zone is very large.

*Palette: zone where the waves are propagated with the greatest range. From the tip, the waves are absorbed further in the JAVA reed.

A relative of the JAVA reed family, the JAVA “Filed - Red Cut” is the first file cut Vandoren reed for jazz and popular music. It also benefits from a completely new design.

The driving force behind the JAVA “Filed - Red Cut” design was to offer more sonic possibilities to musicians while keeping the qualities of the original Java.

ZZ reeds combine the medium-thick heart, spine, and rounded tip of the V16 with the flexible palette design of the JAVA, giving the player a rich, colorful sound with quick response.

V16 reeds have a medium-thick heart (more than JAVA but less than Traditionals), with a profile designed for producing a strong attack with a deep, rich sound.

Launched in 1993 to answer the demand of some American jazz musicians (a JAVA with even more wood). The V16 has a thicker tip than the traditional Vandoren reeds and a longer palette.

If you are not playing with Vandoren reeds, here is a general reeds comparison chart 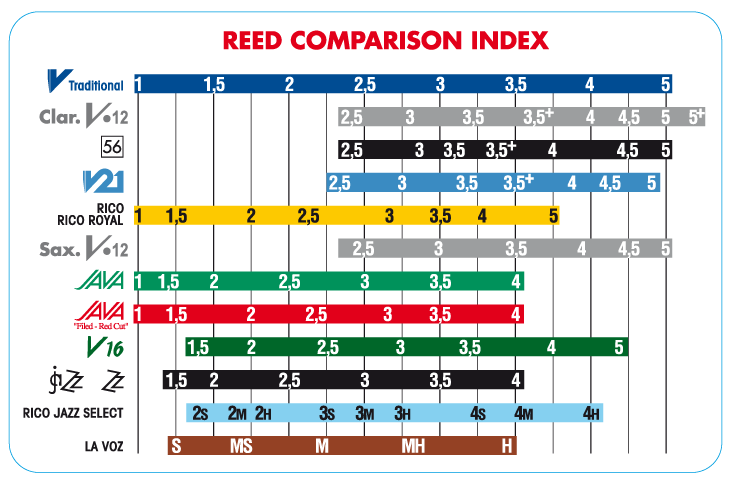